Ms Cohenour is an award winning actress who last appeared on Broadway as the Standby in the role of Elizabeth Arden in the musical War Paint.

Patti’s career break through came when she was cast as Isabel in the New York Shakespeare Festival’s 1st National production of The Pirates of Penzance. She was then chosen as a Mabel understudy in the same company which led her to cover the role in New York. While in New York, she auditioned for Hal Prince’s production of A Doll’s Life and made her Broadway debut understudying the leading role of Nora. She then moved to New York in 1984 and one week later was asked to audition for Musetta in the NYSF’s production of La Boheme. She was not given the role of Musetta, but rather was cast as Mimi to alternate in the role with Linda Ronstadt. Her performance as Mimi earned her the prestigious Theatre World Award, and amazingly she was cast in two Broadway bound musicals on the same day; Big River and The Mystery of Edwin Drood.

After originating the role of Mary Jane Wilkes in Big River where she was presented with the 1985 Theater World Award as well as a Drama Desk nomination; she went on to perform some of her most memorable work as Rosabud in The Mystery Of Edwin Drood garnering critical acclaim as well as the Clarence Derwent Award, a Tony and a Drama Desk nomination, and reprising the role at the Savoy Theater in London’s West End.

After ten months of auditioning, she was cast as the first American actress to play the role of Christine Daae’ in the original company of The Phantom of the Opera, and immediately following her work in Phantom (while originating the role of Lily in The Secret Garden Workshop performances) was asked to reprise Ms. Daae’ in the 1st National Tour of Canada opposite Jeff Hyslop. Following the eighteen month tour, her final performances of the role were with Colm Wilkinson in Toronto. She then returned to Toronto to perform the role of Magnolia in Hal Prince’s Showboat and was honored to sing more of Jerome Kern’s gorgeous music when she performed Adeline in Sweet Adeline for New York City’s Encores Series.

Her return to Broadway was as the Mother Abbess in the 1998 revival of The Sound of Music, and again in 2005 as Signora Naccarelli and the Margaret Johnson Alternate in the Lincoln Center Theatre’s The Light in the Piazza; reprising her Signora role for the Ten Year Anniversary Benefit Concert celebrating the acclaimed and groundbreaking musical.

Through the years she has had the pleasure of portraying Katherine in The Taming of the Shrew for Syracuse Stage, re-visited the role of Mother Abbess in the 2012 Chicago Drury Lane Theatre’s production receiving a Jeff Award nomination, played Maudie in To Kill A Mockingbird for Seattle’s Intiman Theatre, Florence Foster Jenkins in Souvenir for Seattle’s ACT Theatre, and for Seattle’s 5th Avenue performed the roles of Rosabella in Most Happy Fella, Abigail Adams in 1776, Glinda in The Wizard of Oz, Yvonne/Naomi in Sunday in the Park with George with the career highlight of winning the 2013 Gregory Award for her critically acclaimed portrayals of Edith/Little Edie in the 5th Avenue/ACT theatre’s production of Grey Gardens. Her final 5th Avenue performance was as Charlotte Bartlett in the 5th’s Premiere of A Room With A View receiving the Subscriber Choice Award for Best Performance by an Actress in a Featured Role. The most recent regional role was Mama Murphy in the 2014 San Diego Old Globe Theatre’s acclaimed production of Steve Martin and Edie Brickell’s musical Bright Star.

Her concert performances have been conducted by such luminaries as Rob Fisher, Peter Nero, Paul Gemignani, the late Marvin Hamlish and John Dankworth, and she performed the World Premiere of Imant Kalnin’s Rock Symphony No. 4 with the Detroit Symphony, and the Leipaja Symphony in Leipaja and Riga, Latvia.

Her solo recording To an Isle in the Water: The Poetry of William Butler Yeats was produced by multiple Grammy winner Thomas Z. Shepard, and she can be heard on the cast recordings of Big River, The Mystery of Edwin Drood, the 1996 Revival of The Sound of Music, and The Light in the Piazza. 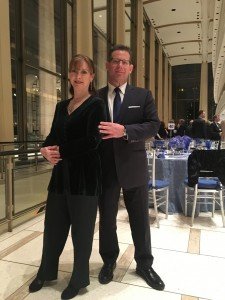