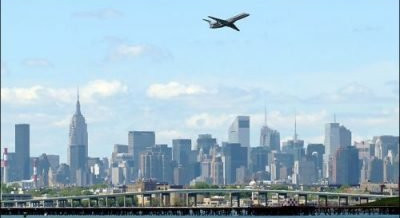 Today I conclude my time on Broadway with the musical War Paint; here are some thoughts…….

I will NEVER be a Standby in a production again! I won’t miss the mess that is New York City, and have become one of those “back in my day” individuals who remembered when audiences dressed up to go to the theater, and ticket prices were reasonable. As far as the future of musicals? It seems that a ninety minute run with no intermission will be the preference, but for a two and a half hour experience there will always be “The Phantom of the Opera” and “Hamilton”!

I’ve lived just off Times Square these last nine months and been absolutely dismayed at the ongoing “Disney-fication” of the Great White Way. 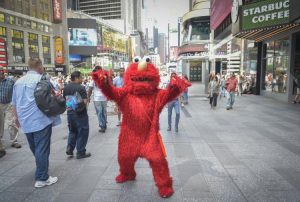 Cartoon characters line up and accost tourists into getting a photo taken with Mickey and Minnie, Elmo, the Hulk (who is horrifying), Olaf, Batman, Spiderman etc. Then there is Naked Cowboy and/or Naked Cowgirl strumming their out of tune guitars, the seven foot tall Lady Liberties, and the discreetly hand painted topless Wonder Women who are compelled to share their delusional talent and beauty. 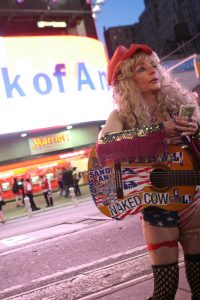 I attempted to walk through Times Square when we had first moved into the Nederlander Theatre to start Tech Rehearsals, but quickly surmised that it was too crowded, and WAY too weird. So, I decided to always walk down 8th Avenue, but that route was precarious as well. People wandering while talking or texting on their cell phones, backpacks used as weaponry, aggressive bicyclists, cab drivers, and various automobiles (often a black Mercedes sedan) being driven by jerks who thought a red light should be ignored, and pedestrians were bowling pins who should be knocked down for points!

Then there were the clustered groups of ticket sellers who aggressively approached tourists to get them on the numerous tour buses that lined up along the avenue. The tourists then clogged the sidewalks while waiting to board the double decker buses in order to peruse the New York skyline, and maybe hear something about the history of the city through the din of horn blowing, pin bowling black Mercedes sedans intent on creating intersection gridlock on their way to going no where. The hapless tourists disembarked, and wandered around (with their backpacks) in a stupor wondering where they should eat, and decided that one of the pizza places, or food carts (serving burned mystery meat) on all the street corners would suffice.

I know I shouldn’t disparage the tourist trade because it ultimately paid my salary, but seriously what happened to sidewalk etiquette, or situational awareness? I know I need to accept the way things are, but it just seems life in New York has gotten a lot worse, and more expensive than EVER! 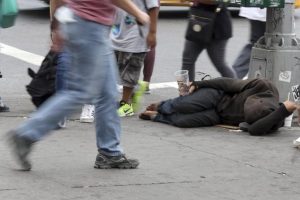 Sadness overwhelmed me when watching the elderly men or women creeping along in their walkers trying to get back to their abodes with what little groceries they could afford. The innumerable homeless with their cardboard messages and soiled paper cups. Or the dog owners dragging their four legged companions around on a lease while being completely unaware that the poor creature needs to do their “business” but can’t because their idiot owner is texting or talking on their STUPID PHONES! Okay….enough rampaging…counting to ten…now… the upside of being in a Broadway show? 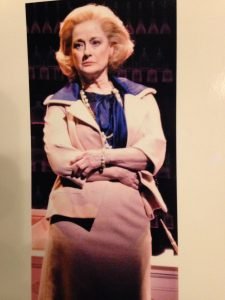 Uuuuuummmmm…….Well I had a decent weekly salary, paid off my credit cards, earned enough weeks to get health insurance for one year, read some good books while donning ear buds at half hour in order to listen to music and drown out the cacophony of sharing a sixth floor dressing room with eleven other women. Also, having some wonderful conversations with my fellow actor understudies who kept me sane, and became good friends as well as therapists. And, finally getting a bit of a handle on the role of Elizabeth Arden after only sporadically performing the part seven times.

The downside; getting copious pages of notes, and stressed from never knowing when I would have to go on as well as never being on stage connecting with the cast and crew on a daily basis. I use the analogy of standing on the train platform as the oncoming train whizzes by, grabbing the caboose handle while attempting to climb onto the back of the moving train with the fear that you’ll never reach your destination in one piece. Understudies, swings, covers, alternates, and standbys have to have nerves of steel, and the ability to undertake numerous roles and be prepared to perform them with little to no notice. It’s NOT for the feint of heart, and considering that my heart is battery run I’m not going to put it through that stress ever again.

The saving grace was finding a comfortable furnished apartment with a nice landlord right smack dab in the middle of the Theatre District and above The Glass House Tavern. This God send placed me near the theater which was an absolutel imperative. 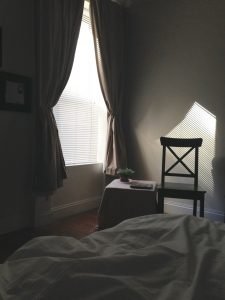 The downside; sometimes I was inundated with sounds of sirens, drunks, delivery trucks, unmuffled motorcycles, ridiculously loud car sound systems, screaming fans, and the “cooking oil and/or “poo extracting” trucks that would show up at seven in the morning to loudly remove slimy goo from the building for twenty minutes. I am certain that when I am safely ensconced in my home and the surrounding silence, I will have to tell my husband to start up a jack hammer so I can get some sleep!

Can I finish this diatribe on a high note? Well, even after receiving the email invitation to the closing party being held three days before we closed, I’m proud to say I was never late for work, never missed a rehearsal or performance, and comported myself professionally except during Tech when I was in a constant foul mood because I HATE tech rehearsals, and had received the unexpected news of my dear friend Roger’s passing. I survived the freezing cold theater (especially in the summer) at the weekly rehearsals, stayed out of the way backstage because it was a dangerous, unforgiving trap where if you ventured out of your assigned place you would inevitably be in someone’s way. I even broke the habit (pounded in me by the nuns) of never using a contraction in a sentence when the playwright wanted contractions to be used; hard to explain so never mind.

Even though it rains at lot in the Pacific Northwest, at least its a pretty color of green, smells clean, and grounds me by reminding me of what is really important in life. I’m Blessed with a beautiful home, and the love and appreciation of my husband and two felines. So…….

Give my regards to the Great Gray Way, and not too sure I’ll be back again! 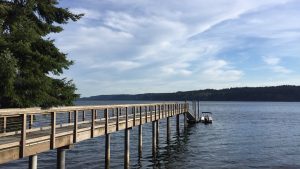 Photo of Patti as Elizabeth Arden by Michael Louis

Photo of our boat at a Pier by Tom Bliss