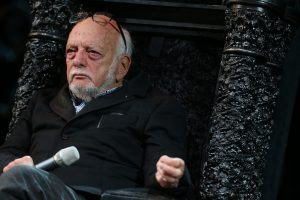 Hamlet “If you ever loved me, then please postpone the sweet relief of death awhile, and stay in this harsh world long enough to tell my story.”

Horatio “Now a noble heart is breaking. Good night, sweet prince. May hosts of angels sing you to sleep”

I pay homage to Hal Prince; a remarkable man who will be held in great esteem for generations to come.

I loved and admired Hal beyond words, and I know he cared for me when he entrusted me to cover two very demanding roles on Broadway; Nora Helmer in the musical “A Doll’s Life” and Christine Daae’ in the original company of “The Phantom of the Opera”!

Both tasks were engulfed in the most stressful of situations. The first surrounded by constant changes and the overbearing sense of doom that hung over all of us; especially our esteemed director. The latter was a political firestorm that Hal was not in a position to fix or protect me. I won’t get into the Phantom political arena, but suffice it to say the rumor mill can take care of all that. Hal once stated “you are the strongest woman I know and can handle it!” I never forgot those words, and even though I have run away from the circus, I take solace in his words as I think of him today. Hopefully, he knows how much his mentorship and support continued to sustain me during those intense years!

I was cast in the 1982 production of “A Doll’s Life” as the Assistant Stage Manager/Helga the Maid/Opera Attendee, but I was also the Understudy to the leading lady Betsy Joslyn as Nora. 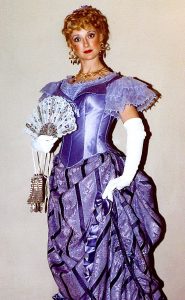 All this happened in the midst of trying to get through the loss of my father in the early Spring of 1981, and the all around mess of a personal life that was in havoc back in L.A. where I lived at the time. Needless to say, I look back on that period with astonishment and amazement at my ability to maintain some sort of balance.

Anyway, we were in technical rehearsals at the Ahmanson Theatre in L.A. and as the Asst. Stage Manager; I was responsible for taking everything off a side table so another actor could strike it before a large blue print of the set painted on canvas could rise from the floor and fly out when Nora slammed the door to leave her old life and take the audience from the Present into the the late 1800’s as Nora begins new adventures.

I made many attempts to remove pencils, legal pads, a pack of cigarettes, an ashtray, the script and a couple of books as quickly as I could, but kept dropping something every time. It was at this point that Hal came rushing up to the stage enraged that I was holding up the entire opening set move! By this time, I was so frustrated myself that I just yelled right back at him that “I only have two arms and ten fingers and that there is no way I could strike all the damn props in time!” There was a terrible silence, and I suddenly realized that I had just talked back to one of the most famous and esteemed directors of the American Theater. I also realized that there would probably be a “pink slip” heading my way, and I should start packing because my job would be over. 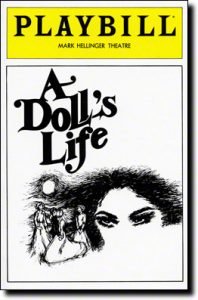 Hal stared back at me for a few seconds (that seemed more like an hour) and said “she is absolutely right! What can we do here to help Patti?” That was when the real Stage Manager, the late great and amazing Beverly Randolph, suggested having a cardboard box by the side table that I could pick up and sweep all of the items with my arm in order to quickly exit Stage Left for my own costume change. Hal grinned and said “Great….lets move on!” It worked, and my employment continued with the Broadway production from Los Angeles to New York, but ended when the show closed after eighteen Previews and five performances.

I suppose the best memory for me during “A Doll’s Life” was when I was suddenly on for Betsy in New York during Previews. I was sitting in her dressing room with five minutes to go before I was to be onstage. Terrified and beyond nervous; all of a sudden Hal knocked heavily on the door which made me practically jump off the stool. He peaked in with those glasses on top of his follicled challenged head and said “I’ve heard  so much about your performance I can hardly wait!” He slammed the door shut and that little moment certainly upped the ante!

At intermission, all I remember is him rushing down the hallway, picking me up and twirling me around in a huge bear hug, and telling Beverly to order blonde wigs for me immediately. From that moment on, he always thought of me as a blonde! He even ordered more highlights to my Christine wig which to this day made me think I looked more like the Bride of Frankenstein then a Swedish soprano.

Ultimately, I take pride in the fact that I was able to reprise Christine in the First National Tour of Canada 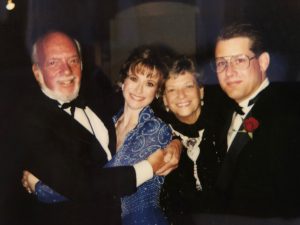 where Hal really focused on me and refined my performance. Our relationship was based on trust! He expected me to have a point of view for my character, and didn’t like a lot of questions. He painted pictures, and you were part of the portrait. If you were prepared he was ecstatic, and when he did have something to say it was profound and enlightening. 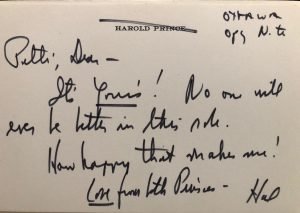 There is a reason he will be held up as one of the greatest directors of musical theater and I was honored to work with him in three productions; “A Doll’s Life”, “Phantom”, and the Toronto production of 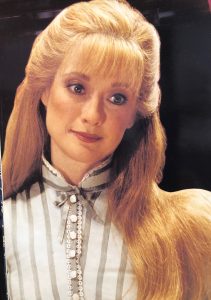 After all of these years and my decision to remove myself from Broadway, and all of the trappings that go with it; there are supposed to be regrets and questions whether I made the right choice by walking away. The reality is that I did perform on Broadway in seven shows, and had the honor and good fortunate to work with Hal Prince in a personal and deeply loving way. He was an enigma, and extremely bright. That could be intimidating, but to me; it was just exciting. You knew that you were in the presence of greatness, and not many people have that chance; I was given three.

The last time I saw Hal was at the Phantom Gala in 2006. I was performing in “The Light in the Piazza” at Lincoln Center, and was able to participate in the Phantom celebration along with hundreds of other Christines, Phantoms, Carlottas, Madame Girys, and other various actors who had performed in the longest running show on Broadway in history as well as all the tours throughout the world. Everyone gathered onstage at the end of the evening which included the Producer Cameron Mackintosh, Andrew Lloyd Webber, the late Gillian Lynne, and of course Hal Prince.

It was a very emotional moment for all of us, and I was so pleased to be standing next to my dear co- star Ms. Judy Kaye as we listened with rapt attention to the sage words of Mr. Prince. Confetti showered down on us, and as everyone was hugging one another; Hal saw me across the way and with his usual confidence and glee bound over to give me one of his bear hugs. It was the highlight of my night. 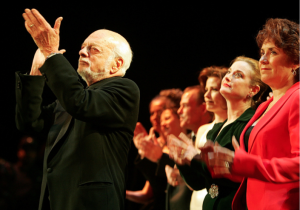 So good night sweet Prince! Angels do indeed surround you and sing as you sleep. May they hold you in the Light you so lovingly and brilliantly placed onto all of us still here in this World!