HomeBlogRemembering a Hero on Memorial Day

Remembering a Hero on Memorial Day

Recently, I received an email from my Gig Harbor Library that informed me that I would be able to sign up with my library card (that I have had for many years) and download a plethora of books. Thrilled with this amazing opportunity; I skimmed through a million possibilities when all of a sudden one book literally (pardon the pun) jumped out at me. It was “Unbroken” authored by Laura Hillenbrand! A few years ago I had bought and read her amazing book about “Seabiscuit” and absolutely fell in love with her writing, 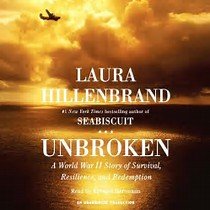 I downloaded “Unbroken” and just couldn’t put it down! I was staggered by the life of Louis Zamberini; an Olympian and a World War II bombardier who survived weeks in a raft on the Pacific Ocean (after the search plane he was ordered to fly in crashed) only to be captured by the Japanese and live in hell for over two years in three different POW internment camps.

I remember reading about Angelina Jolie directing the film a few years ago. There are no words that can really explain the depth of respect I have for the late Louis Zamperini who passed away in 2014 at the age of ninety seven. He was a man who found Faith after battling alcoholism resulting from the scars left by his cruel and horrifying experiences in the War, and then devoted his life to others in hopes of helping them overcome the most difficult obstacle of all; finding forgiveness.

I really can’t remember reading a story so impactful, and recommend this amazing book to everyone. It will inspire and remind them of the strength of the human spirit. Mr. Zamberini is a genuine hero who was a remarkable God fearing man and I wanted to pay homage to him on this Memorial Day.