HomeBlogTwelve Years Since The Darkest Day

Twelve Years Since The Darkest Day 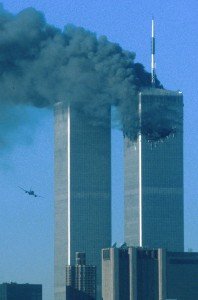 This morning I’m reading this question everywhere.  Where were you on September 11th? Answer.  I was in my bed sleeping when the phone rang in the dark.  It was my husband calling me from L.A. telling me to “turn on the television, turn on the television!”  I groped for the control, pressed the power button, sat up in bed and there on the television was a live feed of smoke billowing from one of the World Trade Towers.  A news anchor was saying that a small plane had accidentally crashed into the tower.  How could that be on such a beautiful clear morning?  My husband and I were talking about how terrible for the pilot and the passengers.  Do you think someone was killed on the floors that were struck?  What could have gone wrong? Engine trouble, pilot passing out?

Then the HORROR as we watched the huge Jet Aircraft appear onto the television screen and plunge into the other Tower!

Twelve years later;  that moment remains seared into my mind, and will NEVER leave.  Every year on this date, I wake up morose, saddened, fearful, and pensive.

As a country that is still in the throes of terrorism and battling the forces of evil at home and abroad; I want to take this moment to thank each and every person in uniform be it police, firefighter, or military for their courage and commitment to protecting and serving all of us in this, the greatest country on Earth!

I know there are those who think we are doomed, but we are not!  We are an extraordinary country with great citizens, and I know that I am one of the fortunate ones in this world to have known true freedom my whole life.  We must hold on to it with everything  we’ve got, because once we let go of it we’ve lost what matters the most; our souls.

God Bless all the souls who were lost that infamous morning, and of course the families who lost their loved ones in New York City, Washington D.C., and Shanksville, PA.